Summertime is quickly approaching and it is a good idea to have some salad ideas ready to include as menu options. 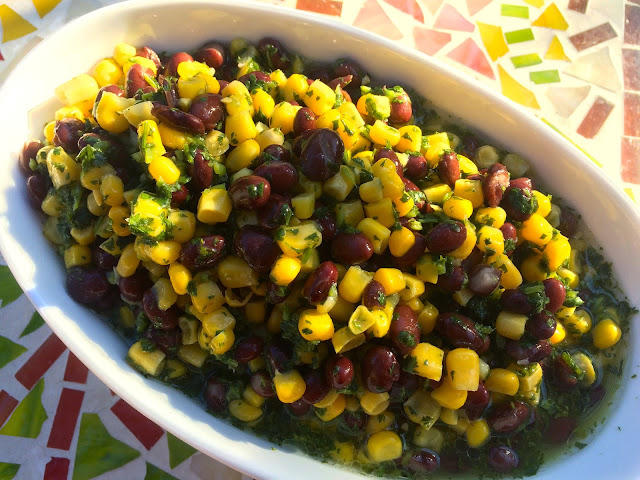 Corn and Black Bean Salad is perfect for summertime barbecues or picnics. We at Cali's Cuisine are generally not fans of getting our food from a can, but we make an exception here.

After preparing this salad many times over the span of a decade (the original recipe was obtained from a family member), we have found there are a couple of key steps to maximize flavor.
While this salad is called 'Corn and Black Bean Salad,' the shining star of this side is an ingredient with no mention in the title: cilantro. The first key step is chopping cilantro in a food processor to an extra fine size. The bulk of the large stems can be twisted off and the remaining stems and leaves chopped. The smaller size chop yields the best flavor punch because more of the cells have been ruptured, thus releasing more flavor deliciousness.

The second key step: this salad MUST marinade for a minimum of 12 hours, preferably 24 hours for the flavors to appropriately develop.

The initial recipe included diced green pepper, but we have found the green pepper took away from the cilantro both in color and flavor.

It is easy to combine these ingredients to make a beautiful and tasty side!


DIRECTIONS:
Posted by Unknown at 8:07 PM

This salad is a great option for a summer barbecue or picnic! I love the combination of flavors!

This salad looks delicious! Perfect for summer! What time is the picnic? I'll be right over! :)

I bet this is really good and corn and beans from a can work for me. We can't always grow our own corn! Have a wonderful Mother's Day!

I love all things black bean. In fact, I am pre-soaking some black beans right now :) This salad looks so good!

i don't use many canned goods either, but black beans are an exception! this is a side dish i ALWAYS keep in the fridge during the summer, and i'll add chopped peppers if i have them on hand.