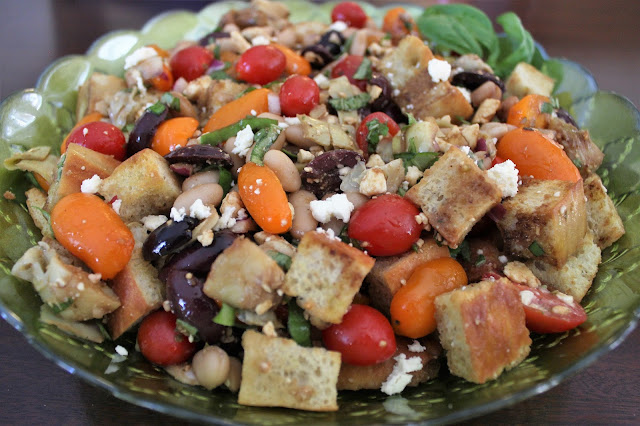 Panzanella is a Tuscan salad that makes used of stale bread by combining with tomatoes, onions and basil and a dressing of olive oil and vinegar.

Mediterranean Panzanella dresses up traditional panzanella with the addition of Kalamata olives, feta cheese and cannellini beans. This exceptional one-dish summertime meal is simple to prepare and the perfect answer to the perpetual, "What are we going to eat today?" question when temperatures rise over 100F.

This recipe uses a fresh loaf of focaccia, but day-old bread could be utilized as well.  Panzanella does not hold well, so mix everything just prior to serving.

Serves 8.
Mediterranean Panzanella was adapted from a May 2017 recipe in Cooking Light magazine.
Posted by Unknown at 3:20 AM

This is my kind of salad! It looks delicious and would make a meal for me even though it's a cool day here today. Thanks for the recipe!