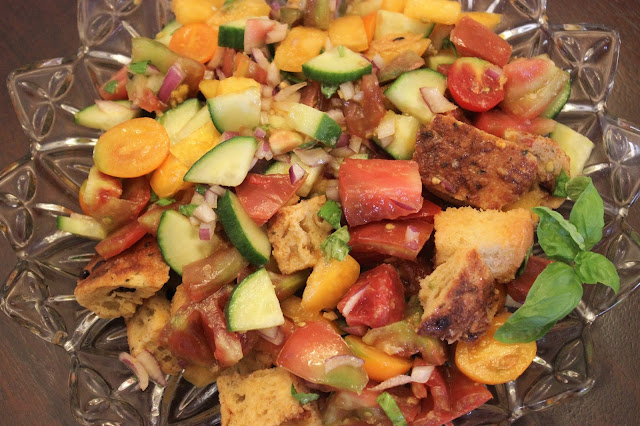 Panzanella is a Tuscan salad that makes used of stale bread by combining with tomatoes, cucumbers, onions and basil and a dressing of olive oil and vinegar.  Classic Panzanella makes great use of tomatoes in the peak of the season.


We have just 'discovered' panzanella this summer.  Our family likes it as a side for grilled meat.  We have also made a more hearty Mediterranean Panzanella that we like as a main course salad.


This recipe uses fresh ciabatta rolls, but day-old bread could be utilized as well.  Panzanella does not hold well, so mix everything just prior to serving.

Note: If serving alongside a lot of other food, it is recommended to blend only half the ingredients, preparing the other half if needed or as a welcomed 'leftover' the next day.

Welcome aboard the panzanella train! It's on of my all time favorite salads, but I mean carbs IN a salad!? What's not to love right??? Yours looks delicious! Cheers!

I haven't made a panzanella this summer---yours looks delicious and is a reminder to whip one up before the summer tomatoes are gone!!

This is one of my favourite summer salads :)

Mmm, delicious, for sure! I definitely have to try this! Thanks!

We first made this when we were staying in Tuscany. It has become one of our favorite summer salads, along with its sister soup, pappa al pomodoro.